yea i watch oth and i was like John Doe!!! Yea apparently he might be peyton's dad...but yea its nice to see him on tv...reminds me of Jeff Parker when he plays his guitar

Former Roswell star, Howie Dorough has announced that he is about to become a father for the first time. Howie D, once played an alien on Roswell. He also used to be in a band called the Backstreet Boys.

Congrats to Howie!
sw
I want an Alien Blast! <3
Top

I do think it's lovely that he's a father though

Nibbles2*****I didn't mean to sound so rude. I thought a newspaper had put out that statement

Peace.
There are many ways to God!
Top

Pilot casting alert: Diane Farr has signed on to star opposite Peter Krause in NBC comedy pilot Parenthood, where she will play the wife of Krause's character. Meanwhile, Better Off Ted's Andrea Anders has landed one of the female leads on CBS comedy pilot Big D (pilot is in second position to ABC's Better Off Ted, which has yet to be renewed); Jill Clayburgh (Dirty Sexy Money) and Henry Winkler (Arrested Development) have been cast in NBC's untitled Justin Adler comedy pilot; Joanna Garcia (Privileged) will guest star on two comedy pilots: NBC's untitled Justin Adler pilot and FOX comedy pilot Cop House (it's worth noting that both roles were originally intended to be regulars); and Lyndsy Fonseca (Desperate Housewives) and Faith Ford (Carpoolers) will star in CBS comedy pilot The Fish Tank. (Hollywood Reporter)
I want an Alien Blast! <3
Top

Clayne Crawford AKA Billy Bob has got a recurring role on 24 for the 8th season. 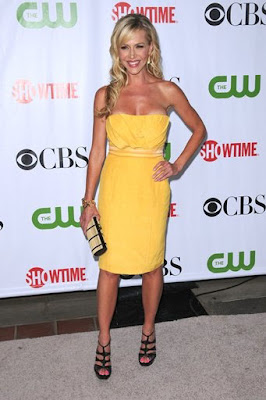 Every time I see Julie Benz I can't help but wonder what would have happened if Max had given Michael a chance to find out that Topolsky really was telling the truth. LOL

Sorry--I know that's OT but I had to share.
Meanwhile, Julie looks fantastic!