What did you dream last night?

Re: What did you dream last night?

I was back in high school and I had just gotten into the lunch line in the cafeteria when some gangster wannbe cut in front of me.

I loudly and bravely said, "Excuse me! I was here first," and stepped back in front of him. Needless to say he was pissed and couldn't say anything for a few seconds, but then he pulled out his phone and proceeded to instruct some of his posse to meet up with me after school.

So the dream jumps to the end of the school day and I'm walking out the front doors and over to my right, I see to smirking and grinning idiots watching me. For some reason, I immediately walk right for them and, even though they say they'll take it easy on me, I start fighting with them

...both at the same time

. Amazingly I do not have ninja moves or super powers (what kinda lame dream is this?

) but still manage to hold my own, until finally I get one of them in a tight choker hold and he passes out from a lack of oxygen

. The other one backs off, but I know I'm in even more trouble now...

And then the dream ends. I've never had such an off-topic dream before, but it could've been worse. And though it was unrealistic, I was still glad I kicked those bullies butts

(even if I was gonna pay for it later). 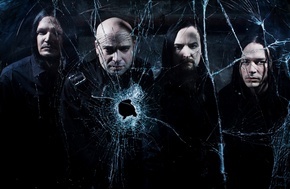 Still, we ravage the world that we love/ And the millions cry out to be saved
Our endless maniacal appetite/ Left us with another way to die
It's just another way to die/ Can we repent in time?
--Another Way To Die by Disturbed
Top

Re: What did you dream last night?

I keep having this dream that I'm back in high school.Everyone is either asking me...'have you studied for the test?'...or I'm wondering around trying to find my class due to not knowing the school.

I have no clue why I'm dreaming being back in high school? Maybe a part of me is feeing bad about getting old and wish I was a kid back in school again?....I don't know!