Fics using the characters from Roswell, but where the plot does not have anything to do with aliens, nor are any of the characters "not of this Earth." 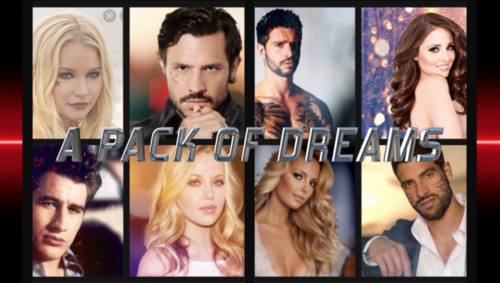 Author’s Note: I am still going to finish When the Fog Clears- I promise. But I had this weird dream the other day about werewolves so I’m going with that. I literally woke up from my sleep and I thought what a fun story...I’m going to write it! If you love Twilight, the BlackDagger Brotherhood, Shadowhunters…you will love this. It has all those Fantasy and Sci-Fi elements with a Roswell Twist. Oh yeah and Roswell doesn’t belong to me. And for all you grammar aficionados out there, this won't be beta’d and it’s full of errors, so read at your own risk.
PS. Don’t be fooled by the picture - Alex makes an appearance too- and a pretty significant one at that.
This is AU with CC--- maybe some UC-- oh and did I mention werewolves? :

A PACK OF DREAMS

Liz lightly glazed her fingertips on the stem of her antique silver hairbrush. It was a part of a set that her mother had gifted on Liz’s wedding day. It came with a beautiful handheld mirror and comb. Liz looked up at herself in the mirror. She had just taken a shower and her hair was damp, just like her dewy skin and rose-colored cheeks. She lovingly held her abdomen.

‘Would it be a girl or a boy?’ she wondered.

Would she one day gift this beautiful silver set to a daughter that had Max’s passionate soul, and her hazel eyes and analytic mind?

A knock at the door awoke Liz from her thoughts, bringing her attention to Max coming through the bedroom door. To this day, Liz would still catch her breath from her husband’s hardened physique and handsome looks. Max, was the alpha of the pack. He was tatted gracefully, only in monochromatic hues across his chest, back, and arms with the Evan’s emblem on his left and right wrists- a signature of their werewolf family. The Evan’s Pack.

Max came from a pure bloodline of werewolves. The Evans Pack was one of the oldest families of the werewolf society. Liz hailed from the Parker Pack, and Max had his eyes on her since they were children. He loved her since he saw her that fateful day at the congregation of the aristocratic families. He knew when he saw her she would be his. One day their eyes locked and they just knew, they knew they would be together.

“Hey showered already?” he asked with a smile, completely bare-chested in just his black sweatpants.

Max came behind her and pulled her in his arms. “Damn, I was hoping we could shower together,” he said as he grabbed her chin from behind turning her head back to kiss him. “Sleep is so overrated when making love is what beds were really made for,” he smirked, as he said more passionate turn-ons between kisses with his wife.

Max loved it when he could feel the smile on Liz’s lips when they kissed. It reassured him that she loved it- loved him. Liz definitely was loving the kiss at the moment, and quickly turned her whole body around to meet his passion. As he started grazing kisses down her neck the strap of her silk white nightgown slid down giving more access for Max to venture down to her decollete with more kisses. He held her closer and deeper. She could feel Max’s pressure from the tips of his fingertips on her hips, slowly sliding them down her lower abdomen reaching for her center. Would the baby feel it too?

“Tempting,” Liz giggled as she pushed Max back a little bit. The motion caught Max off guard. Liz never resisted him. Never. Ever. They were always passionate. This wasn’t like her. This wasn't like them.

“What’s wrong?” Max said as he looked at Liz with such fierce intensity it almost made Liz take a step back. She still hadn’t told Max that she was pregnant. It was only that morning she had taken the pregnancy test. Her period was never late and after three days she just had to see for herself. She was elated to be pregnant, but she knew it was bad timing. Max was taking things so seriously these days at the compound and he was under so much stress. They were getting ready. They were always getting ready. Preparing, Training, Organizing, Devising for the inevitable. The inevitable battle between them and Kivar.

Max nodded. “You seemed a bit out of it at training. You missed a lot of your targets, that's not like you.” He said it so matter of factly. It was the only thing that mattered these days. That everyone was at their best at all times.

Liz was the sharpest knife thrower out of the group. She always hit her targets, dead center, but today, so was completely off her game.

“Yeah, you mentioned that,” Max said.

Max’s brooding body didn’t help Liz feel at ease either. He just kept looking on and she was afraid that he would find out just by looking at her that she was pregnant. She knew that was silly to believe that, but given the robust intensity spewing from Max’s eyes, it was hard to believe otherwise. This level of intensity for Max was rare but when he did it would make her shake with excitement. Liz didn’t tell Max about her pregnancy. She couldn’t --not yet. He wouldn’t take the news well at all. He would say it’s a bad time and get upset and agitated. If Kivar ever became a threat to them, they would have to be able to fight back and survive. Right now things were calm, but they had to always be on alert.

Currently, Max had amped up training hours, and he had Michael working all odd hours on strategy. Michael was the best at strategizing. He had maps upon maps saved on his computer and developed an algorithm that could predict where their enemies would come from based on heat sensors he placed all around the woods. Michael loved getting lost in his work and Max didn’t mind. He especially appreciated how Michael mirrored Max’s concerns and a sense of heightened security measures.

Kyle on the other hand, while always following suit without any hesitance, internally questioned some of the orders. He Would talk to Liz about it at times but he didn’t expect her to go and rat out his disagreements to Max. She was someone he could trust and truth be told Liz found herself confiding in him the most too. She didn’t want to ever disrupt the friendship they had.

“Guess that means you don’t want to go hiking with me tomorrow.” Max leaned back against the sink with his arms crossed.

Hiking was Liz and Max’s code word for shapeshifting into wolves and going running out together in the woods. There was nothing like the rush of running through the beautiful forest as a majestic creature together. Liz would change into a silvery furred wolf with grey eyes and white underbelly, while Max turned into an Auburn Red with black eyes and a thin black stripe running from the top of his head to the end of his tail. The sign that he was the alpha of the pack.

“Maybe if I got some sleep I’ll be able to hit my targets better tomorrow.”

Max could take the hint.

“Fine, go sleep. I’ll be there in a bit,” he replied as he pointed to the shower. Liz left but not before catching a glimpse of Max dropping his pants down.

Liz instantly bit her lip at the yummy sight of her husband’s bare ass. More than anything she just wanted to be in that shower, enveloped in his arms, rubbing against each other all soapy and wet. His hot body on hers. The mere thoughts were making her aroused so she could only imagine how much Max had to suppress. Max was an alpha. What he says, goes, but Liz found a way to tame him.

After Max’s cold shower he came to the bed finding Liz’s back turned to him, curled on the side sleeping soundly. He wanted more than anything to turn her and claim her. She reveled in it-loved his dominance to take charge, but Max knew today wasn’t the day to catch her by surprise. She asked for rest, so rest he would give. He just wasn’t completely sure that she was being completely honest with him so that made him worry. Was it really rest or something else?
Top

Well this is going to be a different story......and you did mention werewolves.....
I'm surprised Liz was hesitant to tell Max she was pregnant.
Loved that "hiking" was a code for change.
Top

I love werewolves, so I can't wait to see where this story will go!
I hope Max won't be angry when he'll learn about Liz's pregnancy.

Can't wait for the second chapter. Love this. Please come back with the next installment!!
I'm eager to see what will happen next.

Return to “Alternate Universe Without Aliens”