Finished Canon/Conventional Couple Fics. These stories pick up from events in the show. All complete stories from the main Canon/CC board will eventually be moved here. 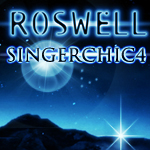 Title: Blowing Off Steam
Author: singerchic4
Disclaimer: The characters of "Roswell" belong to Jason Katims, Melinda Metz, WB, and UPN. They are not mine and no infringement is intended.
Pairings/Couples/Category: ALL, CC, M/L, M/Mi, I/J
Rating: TEEN
Summary: This is a short, one part fic, a comedic vignette if you will. I’m not planning on adding to this unless readers demand it so

. Takes place about 4 months after ‘Graduation’ episode and they’ve been on the road the entire time. After 4 months on the road cramped in that little van the gang’s tensions are high. Enjoy!
Author's Note: I enjoy feedback 


Voices sang animatedly from the backseat of the van …

“The wheels on the bus go?”

“uh, lemme think….Round and round!”

“WOULD YOU TWO KNOCK IT OFF?!” Isabel roared. “Don’t you DARE make me come back there! I’ll stop this van, you know I will!” oh my gosh, I sound like my mother!

“Hey Iz, since when did Mom learn how to throw her voice long distances?” Max deadpanned.

“Hush it you” she half smiled back at him.

“We’re sorry Miss Christmas Naz- I mean Isabel-” Kyle and Maria laughed coyly from the backseat, leading her on.

“WHAT DID YOU JUST SAY?!” Yes, she may be channeling her mother but she had about enough of this after the first 35 choruses of kiddie songs.

“All Hail von Hitler!” They both said in unison, raising their arms in mock salute of her.

“Jinx!” that was Maria

Then in unison “You owe me a soda!” Which lead to many eye-rolls from the rest of the car but with Isabel, these two were just asking for it.

Isabel slammed on the breaks, ripped the van over to the side of the dirt highway and turned around in her seat to scold the highly amused teens-turned-tots-on-speed bouncing in the backseat.

“Don’t Max” Isabel cut him off through gritted teeth. Disregarding her momentary tirade against the sugar-high-cabin-fevered-haven’t-been-on-solid-ground-for-4-months tweedle dumb and dumber in the backseat, she flew out of the driver’s door and started pacing fast circles in the dirt around the van.

Seeing that Max had failed, Liz jumped out of the back to comfort the obviously upset Isabel. Exchanging a knowing and supportive glace from her husband through the window Liz attempted to calm her new sister in law.

“Would you like me to drive?” She said, “I’ll make the ‘sugar and mountain dew high’ twins swear to silence until we reach Colorado, you have no idea the amount of black mail I have on those two” she laughed, trying to make light of the situation.

Isabel slowed her pace to a walk in step with her and laughed a small exasperated laugh. “Note to self: Remind Michael that if he ever loads up this van with anything containing more sugar than a bag of rice cakes that I’m going to CASTRATE him…” she sighed.

“hey!” Liz laughed mockingly, “I said I was going to blackmail Maria, we don’t need to punish her too!” With that Isabel and Liz made eye contact, paused, then burst into unending laughter at the impending castration of Maria’s boytoy.

Michael, said boytoy, stepped out of the van seeing that the coast was now clear…or so he thought. “Hey, is someone having fun without me?” He regarded the sisters as his question made their laughter double.

“According to Izzy’s ‘Note to self’ I think- that is exactly what Maria will have to do--,” Liz struggled to get out between fits of laughter, “if you stock the van with sweets again! At least she’ll be getting more action and a lot more ‘fun’ than she does now.” Michael’s confused face, uninformed of his threatened castration, sent Isabel and Liz doubled over, crying with laughter to the ground.

Michael just stood their shaking his head confused at his apparent naivety.

After a while, their laughter died down and the rest of the group piled out of the van to stretch their legs.

“We’re sorry Isabel!” Maria and Kyle obviously hadn’t dropped the ‘jinx’ing bit, as they spoke in unison, but went to give Isabel a hug in apology. She hugged them back, obviously forgiven.

Max looked around at his family. His beautiful wife, wiping the tears of laughter from her eyes. His brother, now putting his arm around the starting-to-come-down-from-her-high, Maria. Kyle, who was staring off toward some billboard down the freeway. And his sister who, had calmed down from her tirade, still looked weighed down from the endless miles of highway behind them.

“Alright guys,” Max addressed the group, “Something about this needs to change. Isabel’s latest outburst was totally understandable under our current situation.”

“We need something different, Max…” Liz agreed, “we’re all going nuts here,” she regarded Maria, “some faster than others”, who huffed bashfully. “We need a vacation…a road trip!”

“Not to be the voice of wisdom here Liz, but have you checked the terms ‘road’ and ‘trip’ in the dictionary lately?” Michael retorted. “I think they already apply here.”

“No, I mean someplace where we can blend in with the crowd, stretch our legs, get some rest for a few days.” Liz clarified.

Kyle, who had been facing that same billboard for 5 minutes with a far away look on his face, finally picked up their conversation. “Hey guys?” The rest of the group turned to face the billboard he was regarding.

“I think I know just the thing.”

"Kyle...you have GOT to be joking..." Isabel looked at the billboard in disbelief. There is NO way he is serious about this place! I think I might actually be sick.

"Whaaaat?" Kyle says innocently. He knows that it’s a stretch but if the gang goes for it, he might actually make it to... where ever they were headed, alive! And possibly, in a higher plane of existence. Yea-heya!

"NO! No freaking way I'm going," Maria said shaking her head in disbelief, "you can not make me go to some Budastic world mumbo jumbo crap place. You CAN'T and I WON'T. I don’t care how crazy we've all become, there is no way I'm spending my vacation from insanity in some trance of higher enlightenment or whatever" she motioned with her hand above her head to emphasize her point.

"Come on guys," Kyle was desperate "PA-LEEZ??" he got down on his knees in front of Max. "I've got to reach my inner peace within before I can deal with the tortures and evils in the physical world around me!” He went from clasping his hands and begging to what it looked like, meditating on the ground, “Ohmmmmm"

Max didn't quite know what exactly to say to this Buddhist kneeling before him, who was obviously desperate for some kind of help. A half smile on his face and the semi-amusing and semi-pathetic scene at his feet. "Kyle I-" he started, but Isabel interrupted.

"Listen to me BUDDA boy," using that quiet but deathly frightening and threatening tone of hers, "If you think that I'm going to spend more than 2 seconds considering this plan, you're gonna start 'snap crackle and popping' a lot sooner than you think! and its not going to be because—“ she said mockingly, “--you've suddenly got you're oh so precious I-think-I'm-a-newborn-alien-powers,” she shook her head and wagged her finger at him "OOOOOH no! It’s gonna be, this-alien-princess-has-had-ENOUGH-of-your-spouting-on-and-quoting-that-fat-bald-man-for-one-LONG-car-trip-to-hell that comes flying at you like a bolt of lightning!"

That stopped Isabel dead in her tracks. Well, that’s a different story! She thought.

“Alrighty, you’re highness-” she said addressing her brother her expression unchanged, but still looking ready to burn a whole through that smirk on Kyle’s face.

“Yeah, Iz-?” Max laughed to himself. She’s such a gonner!

“Dear brother, we are going to this Buddhaworld, and we’re going now!”

Thank you for reading, I hope you enjoyed it!
If you're having a bad day and in need of a good laugh, click the siggie.